In recent years, the freight rail link between Germany and China has become a smart choice for the time and cost-conscious customers. As China’s economic power increases, German companies choose to open their production facilities there, profiting from the booming Chinese consumer market – this is why rail is so much in demand, being a fast and cost-efficient mode of freight transport. It’s the rail that the customers choose to deliver components and industrial products from Germany to China or back. On top of that, both available rail routes over the Eurasian Land Bridge help serve destinations in Russia, Kazakhstan and Mongolia. Ongoing expansion of the rail network in China and further simplification of customs procedures increase the importance of a direct rail link, as the trade between Europe and China develops.

Currently, four weekly blocktrain services from Duisburg and three weekly services from Hamburg operate to China, in addition to the already mentioned scheduled services from Wackersdorf and Leipzig-Wahren. The new service from the German city of Duisburg runs through Poland, Belarus, Russia and Kazakhstan to the Chinese Chongqing, one of the largest industrial agglomerations of the country, centrally located in the Sichuan province and offering excellent onward connections. 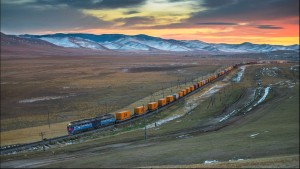 Container train from China to Europe

Freight trains cover the 7650 miles long route in 16 to 20 days, while single wagons take 22 to 25 days to arrive at final destination. The train carries up to 100 TEU (20 ft Equivalent Units) and is able to transport 40-ft GPHC containers as well as standard-volume PWHC containers. All containers are equipped with a GPS tracking system and an alarm function. The Combined CIM-SMGC Waybill introduced in 2012 has greatly reduced the administrative burden on businesses.

Freight train from China to Europe

With 16 to 20 days transit time, rail is much faster than the sea transport which takes up to 45 days to China. Rail is more expensive than sea, but is cost-efficient when compared to the air freight. This means that the blocktrain transport is optimally suited for hauling high-value industrial products like vehicles, electronics and IT equipment but also promotional and seasonal goods which need to be at the final destination as quick as possible, but not at any cost. 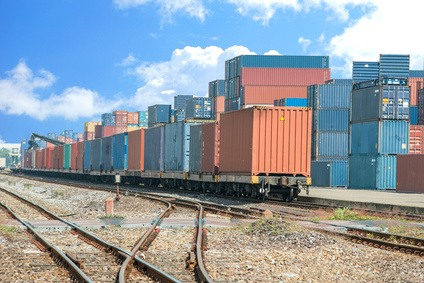 The traditional Northern rail freight route for the most part follows the Trans-Siberian Railway on the Russian soil up to the Zabaikalsk-Manzhouli border crossing point. In China, several transit options are possible: to Beijing or to the sea port of Tianjing. Alternatively, the new Southern routing can be used, dubbed the New Silk Road, which branches off the Transsiberian to the South in Yekaterinburg and then runs through Kazakhstan up to the Chinese border. At the border crossing Dostyk-Alashankou, Chinese Railways takes over the freight transport to the final destination of Chongqing in the Sichuan province, Central China.

History of Rail Freight Transport between Germany and China

The first container train from China had been delivered to Germany back in 1973, following the traditional Transsiberian route. In 2008, a regular container service was introduced between the two countries, but was closed shortly after the financial crisis broke out. In 2010, the Moscovite freight train started servicing the route to Moscow, paving the way for a new regular service to China, and in November 2010, a scheduled freight train from Wackersdorf-Oberpfalz delivered containers of a large German car manufacturer in Shenyang, followed by a freight service from Leipzig-Wahren. Trans Eurasia Logistics GmbH, a joint venture of the Deutsche Bahn AG and the Russian Railways (RZD), was founded in 2008 and acts as a coordinator for the freight rail transport between Europe, Russia and China, ensuring both available routes are sustainably developed and extended along the transit corridor.